Though I wish I was coming at you today with a topical, thought-provoking essay on current events, these last few weeks have been really exhausting… so this recipe is all I’ve got. But it’s a good one!

I can’t remember where I found the original version… it was online somewhere, but I wrote down and stuck it in my recipe box. I made it a few times, and fell in love with these little sourdough morsels that taste EXACTLY like Cheez-Its. (Though you can take that with a grain of salt, since it’s been a while since I’ve actually eaten one.)

But they never entered regular rotation, because baking them was just so labor-intensive. The crackers never baked evenly, so I would constantly be opening the oven to remove the crisp ones. Then I’d have to keep a vigilant eye on the rest so that they all got to the desired degree of crispness without burning. It was just a little too much for me!

WELL. I’m posting this recipe today because I finally unlocked the secret to crackers that are perfectly crisp every time! And, even better, this method is something even a lazy baker like me can get behind. I’m definitely not the first one to discover this little life hack (for all I know, it’s common knowledge), but it’s been a real game-changer for my cracker game, so I wanted to share it with you too.

OK, are you ready for the big, exciting reveal?? Here’s my not-so-secret method: turning the oven off once the crackers are baked and letting them sit inside while it cools.

Does that seem a little anticlimactic? Perhaps, but the results are truly amazing. The cooling oven is apparently a very good dehydrator, so this method also works great for making crispy baked tofu or roasted potatoes.

Now that you know my secret, are you ready to make some DIY crackers?? Thought so! (Although since these are sourdough, there is a fair amount of resting time involved, so it won’t be instant gratification. But this method works just as well with any other cracker recipe!) 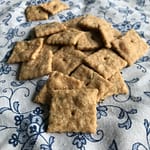 Roll Out the Crackers

Have you tried this method before? Does everyone already know about this trick that was news to me? (Wouldn’t be the first time!) Do you agree that these crackers taste just like Cheez-Its? Let me know in the comments!

Visit Me On Goodreads!

This website uses cookies to improve your experience while you navigate through the website. Out of these, the cookies that are categorized as necessary are stored on your browser as they are essential for the working of basic functionalities of the website. We also use third-party cookies that help us analyze and understand how you use this website. These cookies will be stored in your browser only with your consent. You also have the option to opt-out of these cookies. But opting out of some of these cookies may affect your browsing experience.
Necessary Always Enabled
Necessary cookies are absolutely essential for the website to function properly. This category only includes cookies that ensures basic functionalities and security features of the website. These cookies do not store any personal information.
Non-necessary
Any cookies that may not be particularly necessary for the website to function and is used specifically to collect user personal data via analytics, ads, other embedded contents are termed as non-necessary cookies. It is mandatory to procure user consent prior to running these cookies on your website.
SAVE & ACCEPT